Medicinal drugs that cause drowsiness and inattentiveness may impair driving. The FDA recently emphasized that standardized procedures for measuring drug effects on driving are needed as part of drug registration. Our group developed a standardized on-the-road driving test that offers maximal drug sensitivity and uses a real-life outcome measure of driver impairment that is strongly associated with crash risk. The on-the-road driving test has been applied in ∼100 driving studies for quantifying and comparing the impairing effects of medicinal drugs (antidepressants, anxiolytics, hypnotics,  antihistamines, antiepileptics) and drugs of abuse (cannabis, MDMA, amphetamines) on on-the-road driving. 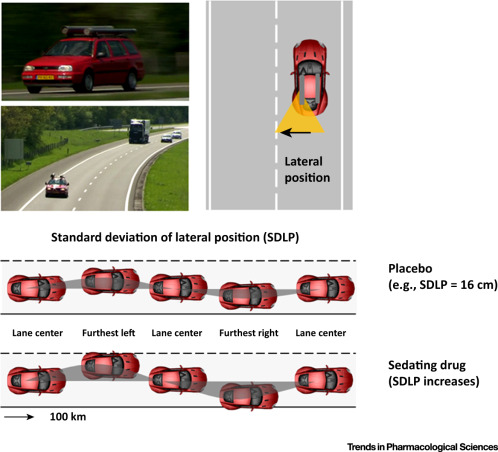 Figure 1. Instrumented Vehicle for Measuring Road Tracking Control under the Influence of Medicinal Drugs. The left upper panel shows the instrumented vehicle during the on-the-road driving test on a primary highway in actual traffic. The lateral position of the car relative to the white middle line is continuously measured during a 1-h drive by means of a camera that is mounted on the roof of the car (right upper panel). The mean SDLP over the entire ride is calculated offline after completion of the test using signal editing software. SDLP is a measure of weaving and indicates road tracking control of the driver. Drugs that induce sleepiness and sedation cause significant increments in weaving motion and thus loss of vehicular control. Abbreviations: SDLP, standard deviation of lateral position (Taken from Ramaekers, 2017). 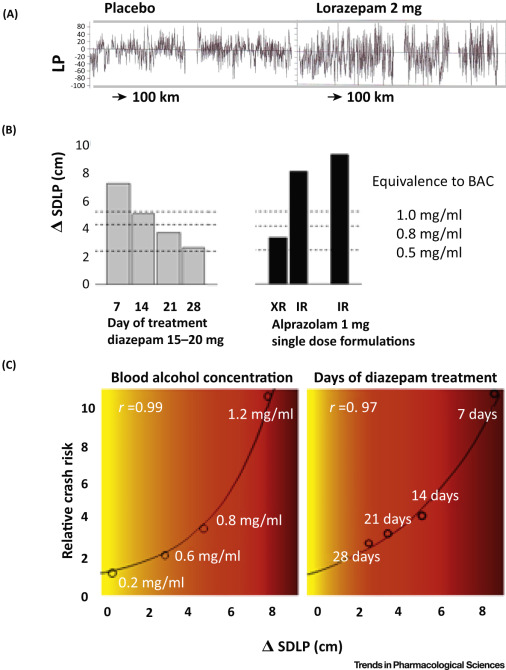 Figure 2. (A) Lateral position of a single individual performing the road tracking task over a 100-km stretch during placebo and after administration of a single dose of 2 mg lorazepam. Weaving motion is visibly increased in the latter condition. In driving studies, Mean SDLP is calculated across drivers for each treatment condition. Drug-induced changes in weaving relative to placebo are compared to alcohol-induced changes in SDLP to determine their clinical relevance. (B) Examples of mean changes in SDLP during 4 weeks of treatment with diazepam and after immediate release (IR) and extended release (XR) formulations of alprazolam (adapted from [6]). In these examples, drug-induced changes are equivalent to the changes induced during driving under the influence of a BAC of ≥0.5 mg/ml. (C) Changes in SDLP as a function of BAC and days of diazepam treatment strongly correlate with crash risk as determined in epidemiological studies (adapted from [10]). The latter suggests that SDLP as measured in the on-the-road driving test is not merely a measure of driver impairment but also predicts actual crash risk. Abbreviations: BAC, blood alcohol concentration; SDLP, standard deviation of lateral position (Taken from Ramaekers, 2017).